My best friend used to be obsessed with this picture of our galaxy taken from outer space. It had one of those red location pins that pointed to one part of the galaxy as if to say, “You are here.” She used to refer to that picture all the time, and from it, she developed a catchphrase: “Nothing matters.” 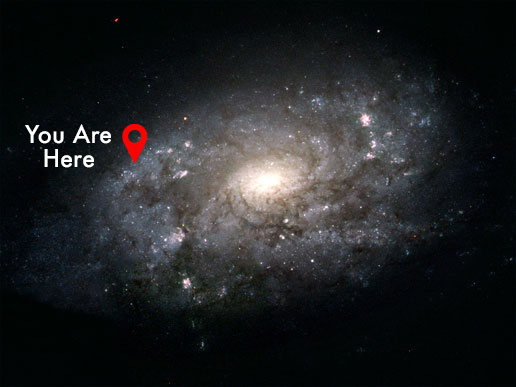 Just as a quick note, If your best friend ever says anything like this to you, your automatic response should be “ARE YOU OK?” Thankfully, in the case of my friend, the sentiment that “nothing mattered” was just an anxiety-relieving tactic, not a cry for help.

When life was getting a little too stressful, she pulled out that image and that catchphrase — the reminder of the universe’s expansiveness was a comfort to her. After all, she was just a minuscule speck, a small fraction of a pixel on that image. Her problems were nothing in comparison to the Milky Way.

About a year after my best friend introduced me to the galaxy photo, I was sitting in an auditorium at a university in Florida, listening to a speaker give a talk about philosophy and our existence (deep stuff, I know). As the speaker neared the end of his talk, he switched to his final PowerPoint slide. My mouth fell open. I recognized that photo! It was the “you are here” Milky Way!

I hadn’t been listening all that attentively up until that point, but the second I saw that image, I leaned forward in my seat, intent on hearing what the speaker had to say about it.

My mind immediately jumped to my friend’s catchphrase — nothing matters. I didn’t want to believe that was true. If it was true, I didn’t see the point in any of it. Why would I exist if I didn’t matter?

The speaker must have known that would be a question on his audience’s hearts. He began to speak again:

“When I look at this image, I am reminded first of how unnecessary I am.”

“Oh, great,” I thought. “Fears confirmed. My life is meaningless.”

But the speaker continued, “I am so incredibly unnecessary. Yet here I am. I exist. How is it that I am not in any way needed, but I’m still here?

“Because I am wanted.”

Those words hit me deep down in my guts. They still hadn’t left me hours after I had walked out of the auditorium.

Growing up in the Catholic Christian faith, I had always been told things like, “God loves you” or “You’re important” or “Jesus loves you so much that he died for you.” When I heard things like that, I believed them to be true on some level. But they were mostly just words to me. They didn’t hold much weight.

When I heard this man describe our existence in these terms, it felt like an anchor was attached to those stereotypical Christian phrases until they sank from my head all the way down into my heart.

The world we live in constantly tries to tell us that we are not enough, especially us women. According to most of the messages circling around us every day, we’re not thin enough, pretty enough, smart enough, or strong enough. After a while, it’s easy to adopt these false conclusions as our own. After that, it’s only a matter of time before we start living out of the insecurities they produce.

What starts out as this small lie being whispered to us eventually evolves into an epidemic — one that causes us to forget or underestimate our worth. It’s as if our default mode becomes the one in which our lives have no true, lasting meaning or purpose.

It’s interesting how, today, when I look at an image of the Milky Way, the feeling I get is exactly the opposite of what my best friend used to say a few years ago. That image makes me feel valuable. It makes me reflect on how my Creator, if He hadn’t wanted me, could have chosen instead not to make me. But He didn’t choose that. He chose me. And He chose you. And on top of that, He chose to make this extraordinary, beautiful, vast playground in which we can exist and grow and discover more about Him.

Me? I’ll take the latter.

Before you get any further, allow me to introduce myself. I’m Erica!

I’m a Content Creator with a passion for holistic wellness and personal growth. My hope is that The Erica Paige helps you find the freedom, peace, and courage to be who you were created to be. I’m stoked you’re here!